Everything you need to know to present a successful house concert

As a lifelong musician I can tell you that a well-organized house concert for an enthusiastic audience is about as good as it gets... a direct connection with the listeners, no sound system to deal with, and a reasonable income on the night for the musicians. As a listener, there's really no better way to hear a concert of acoustic music.

If you would like to have me come and play in your house, wherever you might be, send me an email and we'll see if there's a way to make it happen. With the high cost of airfares, I can't usually fly someplace for one concert, but sometimes it's possible to coordinate several concerts in a region. I sometimes play on my own, both fiddle and guitar, and I sometimes come with another musician or two. Or three.

If you have questions not answered here, please email me.

What is a house concert and how does it work?

A house concert is exactly what it sounds like; a concert presented in a private home. You don't have to live in a mansion to present a house concert, it's more about being organized and most of all enthusiastic. Musicians always play their best when they feel welcome! The concept of playing in houses is not a new idea. In fact, a lot of musicians feel the house concert is just a continuation of a very old tradition. I've been playing these kinds of concerts for almost 30 years and they've mostly been great experiences all around.

How big a house is needed, and how many people for an audience?
There's no rule on this, but generally you'll want to get at least 30-40 people to make it work financially for the musicians.

How is the house concert advertised?
Just inviting people over for some music is not enough. You need to get the word out to a lot of people, then be prepared to take reservations , usually by email, and keep track of who is coming. (There's a general rule of thumb which says that to get 30 people you need to publicize a concert to 300.) The most important thing is having a list of email addresses of friends and people who might be interested in supporting the house concert. Sometimes there will be someone in the community... a musician for instance... who has a substantial mailing list and will forward your announcement. It's usually a good idea to NOT include your address in any announcements going to the general public, only your email and possibly your phone number. This allows you to limit the audience to the size you can deal with. Ask people to confirm their seat in advance, and keep a list.

VERY IMPORTANT: You need to emphasize that when someone makes a reservation it means someone else may not get a seat, so whether they pay in advance or not, the reservation is a definite commitment to come. Ask for 24 or 48 hours cancellation notice if they really can't make it, so someone from the waiting list will get a chance to attend.

Some house concert hosts ask people to send a check or pay with paypal ahead of time to reserve their space, which eliminates the problem of last-minute cancellations.

How much do people pay to attend, and what are the musicians paid?
It used to be that the musicians would be paid whatever happened to be taken in at the door, but that put the risk on the traveling musicians... what if people decide at the last minute to not attend? Or what if the host only notifies a handful of people? The new approach is to offer musicians a guaranteed fee by asking a few friends to take responsibility for part of the total paid to the musicians.

For example, if only ten people (or couples) agreed to guarantee $80 each, the musicians could count on a minimum fee of $800 even if only those ten people showed up. With an audience of 40 and a donation amount of $20 per person, everyone would be paid back out of the income at the door. This makes life MUCH less stressful for the musicians if they're far from home, and the risk is shared instead of placed on the musicians.

The price of admission varies according to where you are, but it's usually at least $20. It's important that someone keep track of the money taken in, and make sure everyone who attends pays their share. Normally all of the money goes to the musicians, although sometimes the host will be compensated for the cost of renting chairs.

What about CD sales?
Musicians often have CDs to sell, an important part of their income and an opportunity for the audience to purchase recordings that might be impossible to find elsewhere. It's very helpful if the host arranges in advance for someone to sell the CDs during the break and after the concert. It's next to impossible for the musicians to sell their own CDs at the same time everyone wants to talk to them. Record keeping can be very simple; have the musician(s) write down an accurate count of how many of each CD they're putting out for sale, and at the end of the night count them again for a total number sold.

Do I need to serve food or drinks?
No. Some hosts do have food and / or drinks, but it's not necessary and it's entirely a matter of how much time you have for it. If friends are coming, a house concert is sometimes preceded or followed by a potluck.

Any other tips?
Chairs! Most people don't have enough seats, but you can ask friends to bring them, or possibly borrow them from a church, etc. They're usually cheap to rent from a party supplies company. Also, if you have space it's good to offer lodging for the night to musicians who are on the road. The cost of motel rooms would pretty much consume whatever they might make at the door.

2 - Take and confirm reservations, emphasize the importance of showing up.

3 - Have someone assigned to collect money and also to sell CDs.

4 - Be sure you have enough chairs. 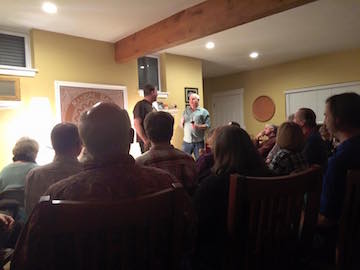 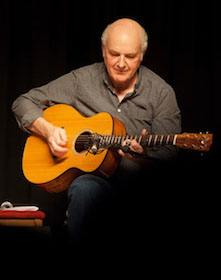 Visit my website, www.randalbays.com for more information on my concerts, recordings, videos, etc.